The growth of skiing in Asia has prompted investment in indoor ski slopes. Could this be the future of skiing?

Experienced alpine skiers might balk at the prospect of indoor skiing, but the industry is attracting huge investment nonetheless. Countries with little to no snow are pouring millions of dollars into snow-making equipment and refrigeration technology used in indoor ski slopes. Skiing used to be a winter sport, a snow sport, and a mountain sport. This list is evidence alone that things have changed.

Countries with little to no snow are pouring millions of dollars into snow-making equipment and refrigeration technology.

With Beijing set to host the 2022 Winter Olympics, China’s interest in winter sports is at an all-time high. Skiing, in particular, has exploded in popularity. A burgeoning middle class has taken to the sport, prompting huge investment in the industry. China now has an impressive 646 ski resorts, 78 of which were built just last year. 2016 saw an incredible 20% rise in the number of visitors to China’s slopes. These figures look set to continue.

In keeping with this trend, China is set to unveil the world’s largest indoor ski park—the Harbin Wanda Snow Amusement Park. Based in China’s northeast, the park will open its doors in June of this year. The record-breaking sports facility features several artificial slopes, the longest of which is 500 m in length. It also features two shorter-length black runs, built at a 25° incline.

Harbin is an alpine skiing destination in its own right. Just an hour’s drive from the Wanda Snow Amusement Park is Club Med Yabuli, an 18-lift ski resort offering 35 km of slopes. But with mountain temperatures dropping below -30°C, perhaps the indoor ski park stands to be more popular with casual skiers.

South Korea’s mastery of artificial snow-making should come as no surprise. The tiny peninsula nation is at the forefront of technological innovation, with companies such as Samsung and LG accounting for much of its economic growth. Many of Korea’s ski resorts rely heavily on artificial snow, even at the peak of winter. This technology has been feeding the slopes of Woongjin Playdoci since 2007.

Located just outside of Seoul, Woongjin Playdoci is one of Asia’s biggest indoor ski parks. Formerly known as Tigerworld, the Playdoci features two artificial ski slopes as well as a water park, golf driving range, spa, fitness centre, and shopping mall. The park’s main slope is 270 m long and 40 m wide. Beginners will want to test their legs on the park’s gentler supplementary slope, just 70 m in length. For the more experienced, there’s an array of boxes, kickers and rails. 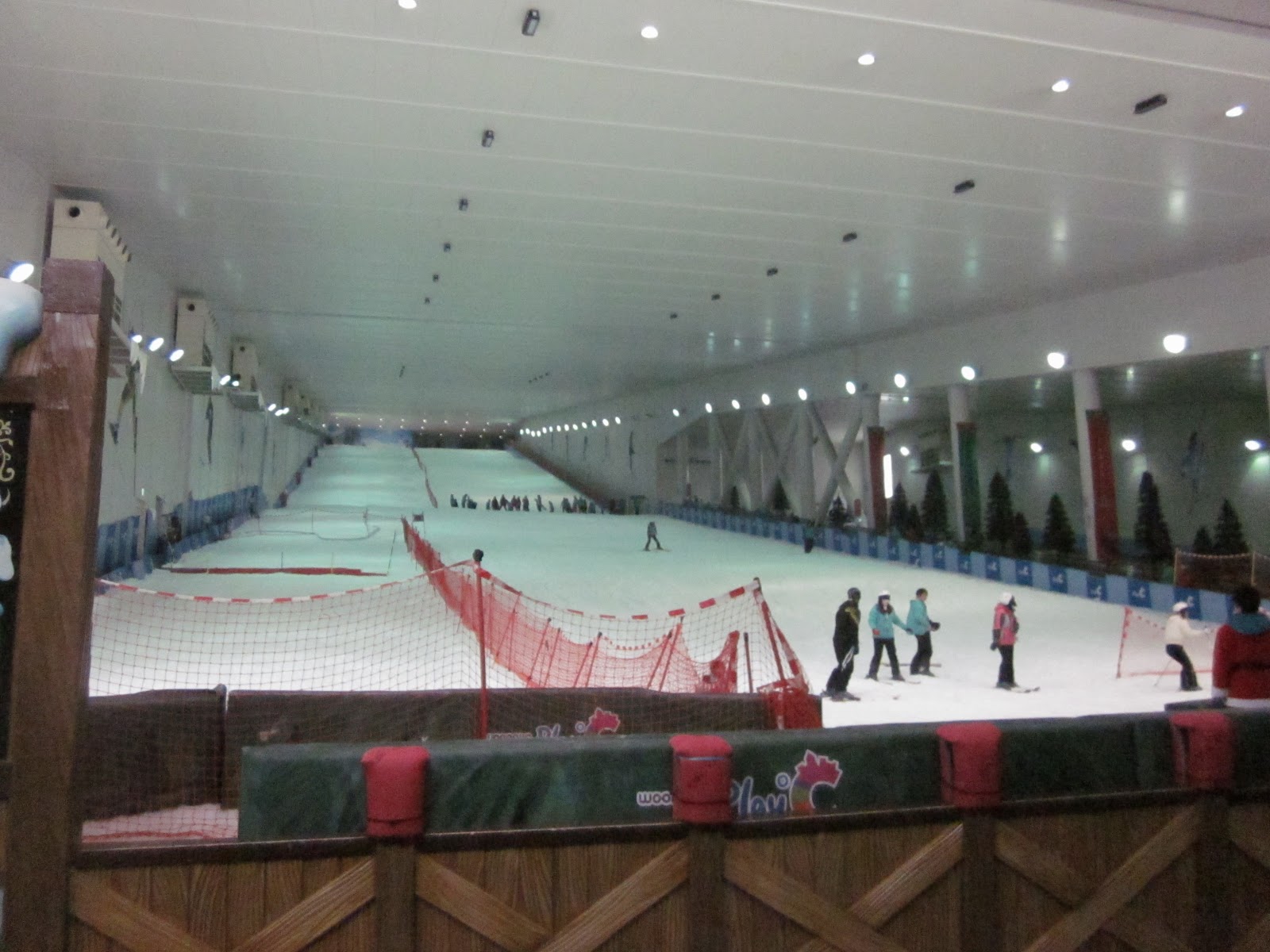 The United Arab Emirates is one of the hottest countries on the planet. Dubai, its most populous city, has recorded temperatures in the high 40s. It’s one of the last places you’d expect to go skiing. Despite this, the city is home to a formidable indoor ski slope. Ski Dubai opened in 2005 and is part of the extravagant Mall of the Emirates.

The resort comprises 22,500 square metres of terrain, three lifts (including a quad chairlift), and five runs of varying difficulty. The park’s largest slope is 400 m in length with an 85 m vertical. More interestingly, the park also features a black diamond run, the only one of its kind when it was built. Ski Dubai’s new penguin exhibit has also attracted attention.

For many years, Ski Dubai was the world’s largest indoor ski park. Although this is no longer the case, the city of Dubai looks set to reclaim its title with a new facility due to open in 2019. The new ski park will feature a colossal 1.2 km run, the world’s longest by a fair stretch.

Dubai is one of the last places you’d expect to go skiing. Despite this, the city is home to a formidable indoor ski park.

Sayama was constructed in 1959 and was one of the world’s first enclosed ski slopes. With its iron beams and vinyl curtains, the park lacks the glitz and glamour of Ski Dubai. Though its snow-making technology was upgraded in the late 80s, Sayama is unrefrigerated—unable to maintain optimal temperatures during hotter months. Regardless, the indoor ski facility houses one of Asia’s longest artificial slopes, at 300 m in length.

Japan’s indoor parks have struggled in recent years, with several big names having shut down. Sayama is still ticking along, even offering all-night skiing on weekends. 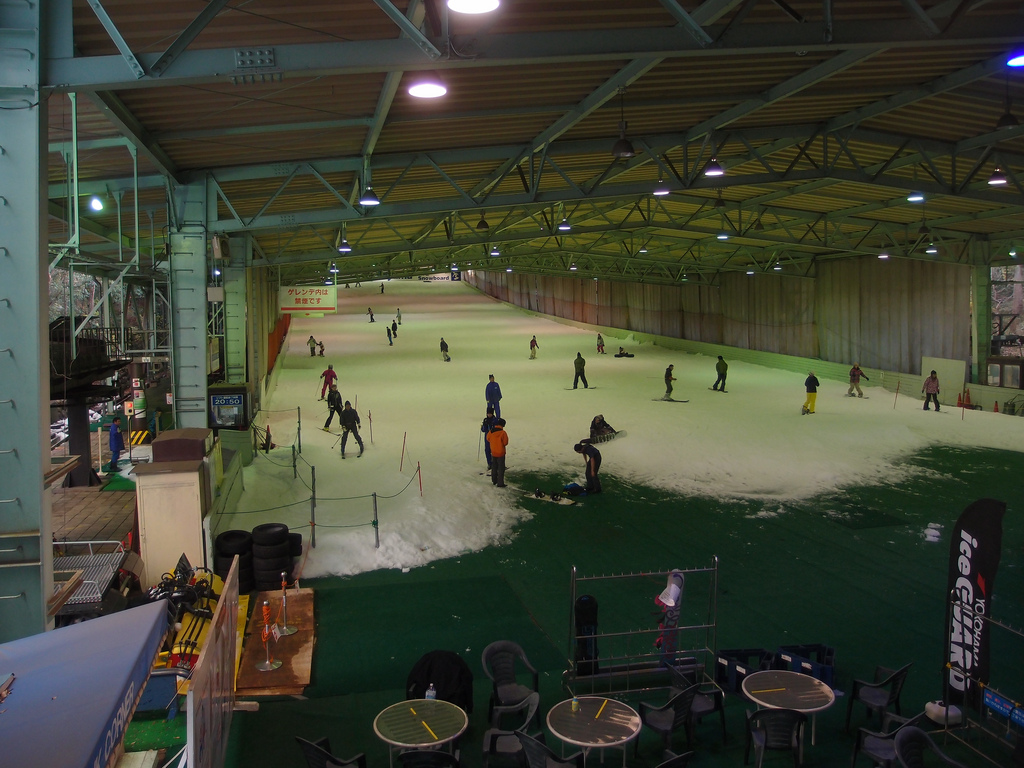 Located within close reach of some of the world’s best alpine skiing destinations, Sayama Ski & Snowboard has some pretty tough competition.

Ski simulators are a more recent development in the world of indoor skiing. Known also as ‘revolving carpets’, these simulators function in the same way as a treadmill. The carpet is made from nylon tufts and uses water as a lubricant. The incline of the slope can be adjusted to suit varying abilities.

Urban Ski in Singapore operates one of Asia’s largest indoor ski simulators. Urban Ski’s slopes are big enough to accommodate group lessons as well as private lessons. Up to four skiers (or boarders) can ride at once. Mirrors are set up so that participants can watch themselves as they learn. The big emphasis is on technique and fitness, but it’s no doubt pretty fun as well!