The next Olympic host nation has a lot to offer ski travellers looking for a new adventure.

Korean ski resorts have enjoyed a surge of popularity in recent years. While Japan still attracts the most attention, Korea’s resorts are a viable alternative, particularly to those looking for more affordable options; accommodation, transport and amenities are significantly cheaper on this side of the ditch. With PyeongChang the host of the 2018 Winter Olympics, now is the time to sample what this country has to offer.

The bulk of ski resorts in Korea are found in either Gangwon-do or Gyeonggi-do, Korea’s two northernmost provinces. Gangwon-do is dominated by the Taebaek mountain range and as a result, offers the best natural conditions for skiing. Gyeonggi-do is Gangwon-do’s western neighbour. Resorts in this area benefit from proximity to Seoul (Gyeonggi literally translates to ‘area surrounding the capital’). For those willing to sacrifice snow quality for convenience, this is where to look.

Resorts are generally accessible via privately-run shuttle buses. These operate out of Incheon airport and central Seoul. Public express buses are a cheaper alternative, but will add a considerable chunk of transit time.

Yongpyong is Korea’s biggest ski resort (31 slopes) and its name is synonymous with skiing in Korea. Yongpyong hosted the slalom and giant slalom events at the last Winter Olympics. The resort is serviced by 15 lifts (including a 3.7km, 6-person gondola) that operate across four ‘zones’. There’s plenty of mountain to conquer regardless of ability. 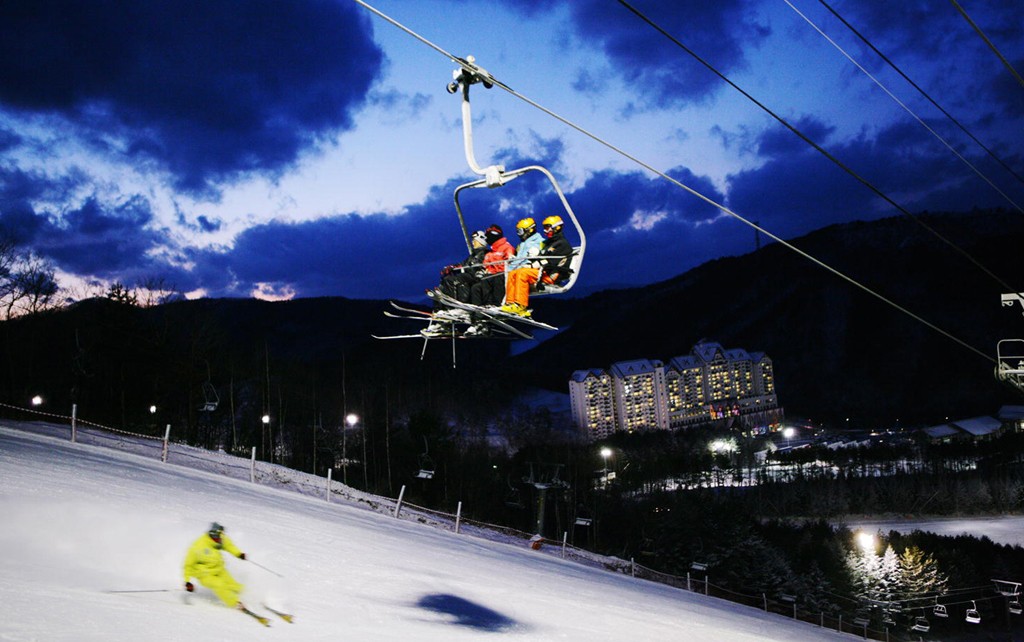 Those who like packing as much skiing as possible into a single holiday will appreciate YongPyong’s night skiing hours. Image: Korea Tourism Organization

The more challenging terrain is found in Dragon Zone which is accessed via Yongpyong’s only gondola. Skiers disembark at Dragon’s Peak (1438m), the starting point for the popular Rainbow runs, four of which are rated ‘Super Advanced’ by Yongpyong. Beginners have numerous options on the other side of the mountain.

Yongpyong is one of the more established resorts in Korea and visitors will find accommodation and dining facilities to suit all budgets.

High 1 is one of Korea’s more picturesque resorts, offering stunning views of the Taebaek mountains. Because of its elevation, High 1 relies far less on artificial snow than many other resorts in Korea. The combination of snow quality and slope size is matched only by Yongpyong.

The resort is spread across three peaks, Jijang Mountain Peak (1345m), Valley Top (1376m) and Mountain Hub (1250m). Beginners can work their way up to Valley Top and enjoy a gentle 4.2km run down the mountain. More advanced skiers will gravitate towards Mountain Hub.

Mountain Top Restaurant, High 1’s famed revolving restaurant, is an ideal resting point for those looking to soak up the views from Jijang peak. Diners are promised panoramic views of the surrounding mountain ranges. Back at ground level, High 1 visitors have access to the largest casino in the country (and the only casino that will legally admit Korean citizens).

Another of Korea’s more popular resorts is Phoenix Park Resort. Spread over two peaks (Mont Blanc and Bulsaemaru), the resort is equipped with 8 ski lifts and one gondola. Skiers have 22 slopes to choose from, ranging from beginner to expert. The resort also features a mogul course and terrain park. All freestyle skiing and snowboarding events took place here during the 2018 Winter Olympics.

Phoenix Park Resort has been selected as the Olympic venue for all freestyle skiing and snowboarding events. Image: Korea Tourism Organization

Sitting at a lower elevation than both Yongpyong and High 1, Phoenix Park relies on an extensive artificial snow-making system. Although this won’t enthuse experienced skiers, beginners will enjoy the reliability of Phoenix Park’s well-groomed pistes. The resort also offers plenty in the way of ski and snowboard instruction.

Phoenix Park is renowned for its first-class facilities. Dining options are plentiful and western palates are well catered for. Accommodation is offered at all price points, with a 5-star hotel, numerous condominiums and a 76-room, slope side youth hostel.

Vivaldi Park’s facilities are amongst the best in Korea, with 10 chairlifts servicing around 6.7 km of skiable terrain. These include Asia’s first 8-seater express chairlift and an 8-person gondola, which transports skiers and snowboarders to a modest height of 580 metres.

While the resort is smaller than several of its Gangwon-do counterparts, it is undoubtedly the best of the ski resorts within easy reach of Seoul (just 45 minutes away), and – somewhat controversially – earned the title of Korea’s Best Ski Resort at the 2017 World Ski Awards.

As the most visited ski resort in Korea, Vivaldi Park can get busy during peak periods, so pick your times wisely. If you can handle the cold, the best time may in fact be the evening session (18:30–22:30), when the crowds have turned in for the day and the slopes are lit up under floodlights.

Those based in the capital might consider Konjiam, a 9-slope resort within a 45 minute drive south of Seoul. Konjiam’s unique selling point is that it limits admission to 7000 visitors per day. Konjiam guests needn’t worry about the long lift queues and excessive crowds that plague other Seoul-serving resorts.

Konjiam is close to Seoul, but it limits admission to 7000 per day to keep crowds under control. Image: Korea Tourism Organization

Konjiam is serviced by five high-speed chairlifts. Beginners will want to test their legs on Hanui, Konjiam’s gentlest slope. Those with more confidence can head to the top of Firmhill and enjoy views of Mt. Dobong, Namsan Tower and Kwangju city.

Typical of many resorts in this area, Konjiam also offers night skiing until the early hours of the morning. Slopes are open until 4am, well after the ski schools and young families have packed up.

Topping off our list is Deogyusan Ski Resort, located in Muju-gun, Jeollabuk-do. Despite being in Korea’s much warmer south-west, there’s a lot to like about this resort including long runs (Silk Road, 6.1km), challenging terrain (a handful of double-black diamond runs) and gorgeous scenery. Nestled in the Gucheon-dong Valley, Deogyusan offers an alternative to those looking to steer clear of the capital.

Deogyusan offers an alternative to those looking to steer clear of the capital. Image: Korea Tourism Organization

Being further south, Deogyusan’s season is relatively short and snowfall is far less consistent. As is common in Korea, the resort relies heavily on artificial snow. However, skiers have plenty of ground to cover. Thirty-four runs stretch across two sections of mountain (Mansun base and Seolchun base).

5-star accommodation is on offer at Hotel Tirol, although cheaper options are available. The resort also features an outdoor hot spring.

Skiers jump from chairlift in South Korea as it starts wildly spinning back...

10 reasons to get excited about PyeongChang 2018 Winter Olympics