A complete guide to Korea's biggest, oldest and most popular ski resort.

Spanning 4,300 acres and 29 km of marked trails, Yongpyong is South Korea’s biggest ski resort. Built in 1974, it was also Korea’s first purpose-built alpine resort, and to this day remains its most popular.

Yongpyong is located in Pyeongchang, Gangwon-do, a rural county that encompasses part of the Taebaek Mountains (a ridge that runs that entire length of the Korean peninsula). Yongpyong is one of several ski resorts in the region, and one of four resorts that were selected to host the alpine events at the PyeongChang 2018 Winter Olympics.

Yongpyong is one of several ski resorts in Pyeongchang, and one of four resorts that were selected to host the alpine events at the 2018 Winter Olympics. Image: Tan Cheng Joo

Yongpyong’s popularity might also be attributed to its status as a major filming location. The resort has featured in several popular TV series, most notably 2002’s Winter Sonata, a K-drama that accumulated a worldwide fanbase, and is largely responsible for kickstarting the global Hallyu (Korean wave) movement. Yongpyong was also used more recently to film Goblin: The Lonely and Great God (2016) and That Winter, the Wind Blows (2013).

Yongpyong is serviced by 15 cable lifts (totalling 13.7 km) including an 8-person high-speed gondola, which whisks skiers from base level to Dragon Peak (1,438 m), the resort’s highest point. Rainbow Gondola is open to tourists all-year-round, and provides an excellent platform from which to soak up the views of Balwangsan and surrounding mountains.

Beginners are well catered for, with an abundance of green and blue-level runs to check off. Nervous skiers will find comfort in the width of Yongpyong’s slopes, allowing for plenty of room to maneoure – a luxury in Korea. More confident skiers should board the gondola, which terminates at the top of Rainbow Zone, allowing access to some of Yongpyong’s steeper, more challenging terrain. Here, those in want of the Olympic experience can retrace the slalom and giant slalom courses used at the Pyeongchang 2018 Winter Olympics.

Beginners are well catered for, with an abundance of green and blue-level runs to check off.

For moguls, head to Yongpyong’s New Red slope (Red Zone), which runs adjacent to the main Red slope. The resort is also equipped with a serviceable terrain park (Dragon Park), found on the Mega-Green run in Silver Zone. The park offers a variety of kickers, boxes and rails.

As a winter destination, Yongpyong benefits from both its northerly latitude and high elevation. The resort, located in South Korea’s northernmost province, lies within 100 km of the North Korean border, and sees winter temperatures of well below 0°C at base level – the PyeongChang Winter Olympics were the coldest in 20 years. Importantly, these temperatures allow for a longer ski season than anywhere else in the country. The season generally kicks off in mid-November and runs through till early April.

Yongpyong sits at a base elevation of 700 m and climbs to a respectable 1438 m (738 m of vertical). It towers over its neighbouring resorts, Alpensia (970 m), Phoenix Park (1080m) and Jeongseon (1370 m). As a result, Yongpyong benefits from greater natural conditions than perhaps any other resort in South Korea, receiving an average of 250 cm of snowfall per year.

All South Korean resorts, Yongpyong included, are reliant on artificial snow-making systems that provide a consistent base throughout the ski season. Conditions at Yongpyong will especially suit beginners and intermediates who enjoy the consistency of a pisted slope.

Note: Advanced skiers and powder hounds may need to look further east to the ski resorts of Japan, where the onslaught of winter can bring up to 20 m of fresh powder per season. These resorts, particularly in the Hokkaido region, are blessed with opportunities for back country skiing that simply don’t exist in Korea.

Thanks in part to the Olympics, Yongpyong is well set up to handle guests. There’s an abundance of accommodation options at the base of the resort.

The resort-owned Dragon Valley Hotel occupies prime real estate, just a stone’s throw from the slopes. A two-time nominee for South Korea’s Best Ski Hotel, Dragon Valley is Yongpyong’s sole 5-star option, and has attracted favourable reviews online. The standard rate for a deluxe room (twin/double) sits at ₩320,000 (US$300) per night, but room prices fluctuate wildly; a mid-week or low season booking will save you a significant chunk of cash. The hotel is equipped with both sauna and public bath facilities, located on the lobby floor.

Yongpyong Resort also operates its own youth hostel, designed to accommodate large groups, families and budget travellers. The hostel offers dormitories and traditional ondol (underfloor-heated) rooms with shared kitchen and bathroom facilities. Individual bunks are listed at ₩40,000 (US$37) per night. Alternatively, a standard ondol room, capable of sleeping six people, can be booked out for ₩240,000 (US$225) per night. These rooms feature wooden floors and traditional Korean-style futon mattresses – often very thin.

Thanks in part to the Olympics, Yongpyong is well set up to handle guests. There’s an abundance of accommodation options at the base of the resort.

Blocks of apartment-style condominums are dotted around town, offering a mix of Korean and Western-style lodging. These condos tend to offer a more spacious living area, equipped with kitchen, dining and entertainment facilities. A two bedroom condo typically fetches upwards of ₩500,000 per night; however, smaller studio set-ups can be found at cheaper rates.

Privately-owned ‘pensions’ (holiday homes) are available to rent all over Korea, and Yongpyong is no exception. These can be booked out via any number of the major booking websites including booking.com, agoda.com etc.

Alternatively, skiers may opt to stay in Seoul and commute to the slopes. There are multiple transport links between Seoul and Yongpyong, described below.

A variety of shops, restaurants and services are found in Dragon Plaza, a 3-storey complex at the base of the resort. This is where the bulk of skiers go to organise rental, equipment and lockers. One of two ticket offices is found just outside the plaza.

Yongpyong sells gift cards which can be used throughout the resort to pay for lift passes, food, rental and even accommodation. Heavy discounts are applied to purchases made with these cards (up to 40% on lift tickets). Skiers can purchase a gift card from one of two ticket offices or from the front desk of the Dragon Valley Hotel.

The Yongpyong Ski and Snowboard School, based in Dragon Plaza, provides English-language tuition (also Spanish, Italian and Mandarin). Both private and group classes are available, with lessons are offered in 2 or 4-hour blocks. Fees are quite steep by world standards, particularly if you’re looking for private tuition. For two hours of private instruction, expect to pay around ₩300,000 (US$277). Group classes (max 7) run at ₩70,000 (US$65) per person.

The resort’s rental shop can be found on the first floor of Dragon Plaza. The shop is stocked with a variety brands and styles to suit all abilities and tastes. Fees are very reasonable – ₩33,000 (US$30) per day for a standard set of skis, boots and poles. Premium models are available at extra cost.

For anyone in search of new gear, several retailers exist within the same building. Ski repair/tuning is also available in the repair shop, located on the first floor.

Options for food are plentiful within resort grounds. Both Dragon Plaza and Tower Plaza house a variety of restaurants, cafes, fast food chains, and coffee shops.

For a fairly typical (but enjoyable) Korean barbeque experience, try Yongpyong Hanu, located in the Valley Center in front of Dragon Valley Hotel. The specialty on offer here is marinated beef, cooked at the table, as is customary in Korea. Beer and soju are also available.

There’s only one on-mountain dining option, Dragon Castle, found at 1438 m – atop Dragon Peak. Here, you’ll find a variety of western and Korean options, but better value can be found at base level. 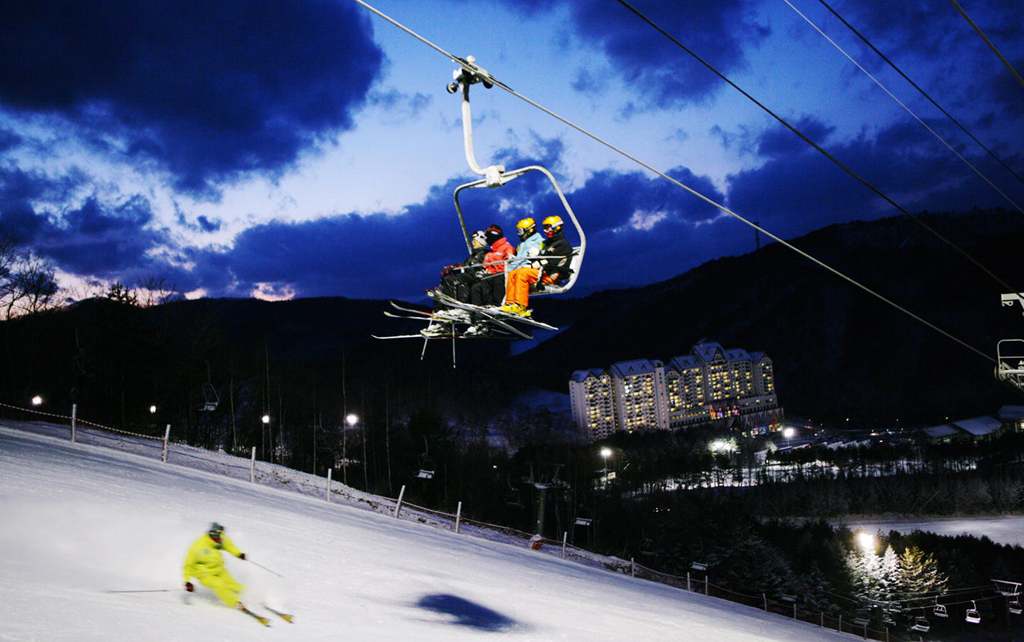 Nighttime entertainment options exist if you’re willing to embrace the Korean version of après ski. Head to Tower Plaza and partake in the Korean tradition of noraebang (Karaoke), the country’s most popular after-hours activity. Other options include bowling and billiards, also found in Tower Plaza on the basement floor. Dragon Strike, the resort’s neon-lit bowling alley, has its own western-style sports bar – a good spot to enjoy a rejuvenating beverage.

Alternatively, why not just continue skiing? Yongpyong offers evening-night skiing from 6:30 pm to 12:30 am. The slopes at this hour are in surprisingly good condition thanks to the groomers that do a quick tidy-up at the close of the afternoon session.

Yongpyong is a self-contained resort. All life and activity exists within resort grounds. There are numerous restaurants and cafes in which to grab a decent meal, but the resort lacks the atmosphere of a true ski town.

If you’re thirsty for Korean culture, book yourself into a jimjilbang for the evening. A Jimjilbang is a Korean-style bath house, typically equipped with hot spring baths and underfloor-heated ‘ondol’ rooms. The baths are gender-segregated, requiring guests to bathe without swimwear. Families can reconvene in the mixed-gender ondol rooms.

Peak Island, Yongpyong’s four-storey water park, is one such place to enjoy a relaxing jimjilbang. The park is also equipped with golfing facilities and a sauna zone.

There are two recommended ways to commute between Seoul/Incheon and Yongpyong Resort: KTX train or private shuttle bus.

Developed with the Olympics in mind, the newly built Korail KTX line runs from Incheon Airport (T1 and T2) to Gangneung, on the east coast, stopping at Seoul Station on the way.

Skiers headed to Yongpyong should disembark at Jinbu (Odaesan) Station – not Pyeongchang Station (though Jinbu Station is located in Pyeonchang county). Beware that not all trains on this line stop at Jinbu. The commute time between Incheon Airport and Jinbu is approximately 140 minutes, whereas from Seoul Station, it’s approximately 90 minutes.

A regular season timetable is not yet available; however, KTX tickets can be purchased up to one month in advance here.

From Jinbu Station, skiers will need to take an hour-long shuttle bus to Yongpyong Resort. Buses run six times per day, every other hour from 9:30 am to 7:30 pm.

These shuttles can be booked via the Tour to Korea website. There are multiple pick-up points in Seoul including Seoul Station, Hongik University Station, Gangnam Station and Itaewon Station among others.

Yongpyong’s lift passes are reasonably well priced by international standards. A Basic Day Pass (8:30 am – 4:30 pm) costs ₩76,000 (US$70), providing unrestricted access to the resort’s four mountain zones. Skiers coming from Australia, Europe or the US will be used to paying in excess of US$100 for the same service.

However, Yongpyong’s rates might not sit so well with Japanese skiers, who are used to paying pennies on the dollar for lift tickets. Niseko United, one of the world’s most revered powder destinations, sells its all-mountain pass for ¥7,400 (US$68) – a ticket that covers 38 lifts and 55 km of terrain. Many of the smaller resorts in Japan offer lift tickets under the ¥5000 mark (US$45).

Ski rental at Yongpyong is excellent value. Skiers can expect to pay around ₩25-35,000 (US$23-32) per day for equipment. Half-day discounts, however, are minimal.

Gift cards purchased from the resort will enable access to heavy discounts on tickets, rental, gear and even accommodation.

Plan the ultimate Yongpyong ski holiday by speaking to an expert

Request a quote from the ski Korea experts

Get the best deals on ski holiday packages in Korea, including lessons accommodation and rental.