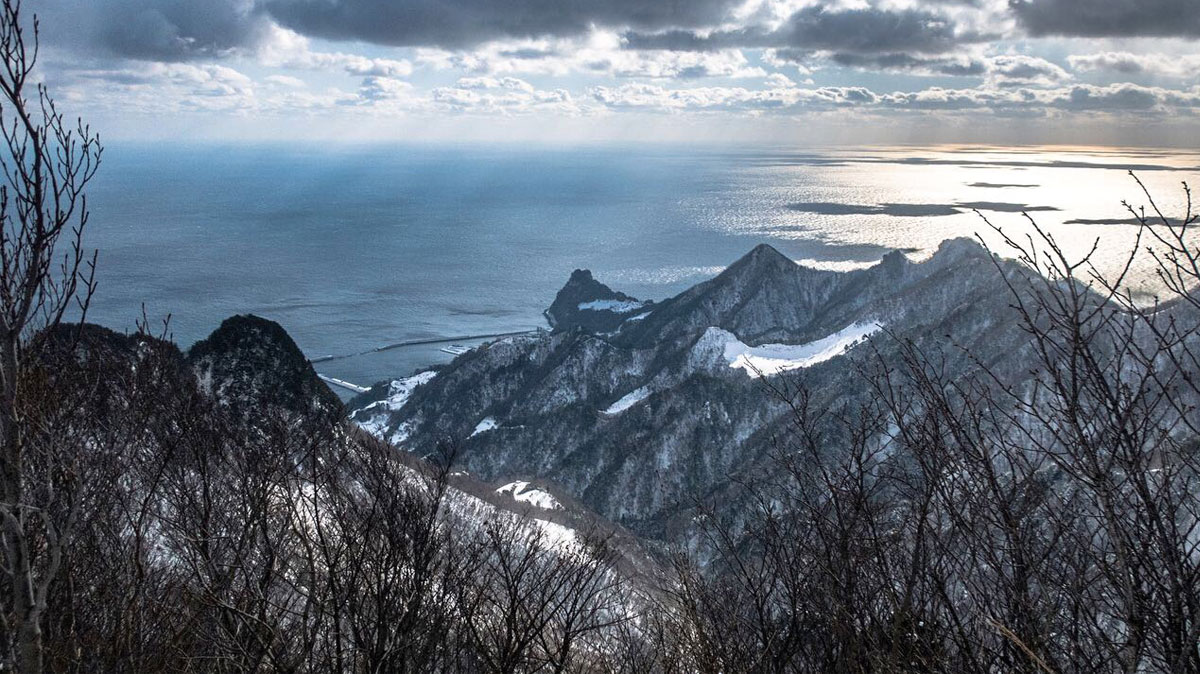 Powder skiing on a secret Korean island: here’s how

Powder skiing on a secret Korean island: here’s how

“I can guarantee there won’t be anyone else on the mountain”, says Max – guide and owner of Teamax Adventure – who has agreed to talk to me about skiing on South Korea’s mysterious Ulleung Island (Ulleung-do).

For the uninitiated, Ulleung-do is a picturesque volcanic island located roughly 120km east of the Korean Peninsula, known for its crystal blue water, jagged volcanic terrain and unspoilt coastal views. Despite being (somewhat ironically) named in 2012 by Lonely Planet as one of the world’s best secret islands, it has managed to retain its mystery and allure; adventurous Korean tourists make the trip in peak season to hike its breath-taking coastal walkway, but in winter it has been referred to as “possibly the quietest place in South Korea”.

Max came across Ulleung-do in 2011, shortly after returning from a stint working as a ski guide in Japan. In his search for the best backcountry terrain and snow in South Korea, he scoped out as many mountains as he could and, after seeing just a single photo of Ulleung-do’s wild winter he dropped everything to see it for himself.

“I thought, ‘ok, let’s check out the Korean kimchi powder'”, says Max, as he recalls his earliest experience on Ulleung-do.

“I went there and after just a few turns, knew that it would make a fantastic playground for Korean backcountry skiers.”

Ulleung-do gets up to six metres of powder snow every winter, says Teamax Adventure guide and owner, Max. Image: @piggybankm

Max now takes clients to the island on a regular basis, but cautions that it is a trip for the adventurous, and that strong skiing or snowboarding skills and some backcountry experience are advised. A typical day in the Ulleung-do backcountry involves a three and a half hour hike to the peak of Seonginbong (984m), where the group will have lunch before skiing down to Nari Basin, a crater basin formed after the collapse of Seonginbong’s caldera. From there, they hike two and a half hours back to the summit, before skiing all the way down to sea level – close to 1,000 metres of vertical.

The hike to Seonginbong’s summit is steep and challenging. Image: @piggybankm

Is the skiing worth the hike?

“The first part is very good. In some ways similar to Japan because the trees are nicely spaced, although the snow can be a little bit wet because of the coastal location. Further down the trees are more dense, and there are some very steep sections – like a double black run. It’s not easy.

“But if you’re looking for a challenge and like the idea of having a mountain to yourself, then Ulleung Island is the place for it.”

It becomes even clearer at this point that a trip to Ulleung-do is a far cry from most people’s idea of a ski holiday. You won’t find any chairlifts, snow schools or ski patrollers, and if you feel like a mid-morning coffee or hot chocolate, you’d better have prepared it yourself and packed it into your backpack.

And you’d be mistaken for thinking the hike and ski is where the adventure starts and finishes. Getting to Ulleung-do is, in itself, quite a serious undertaking. Max allocates two days each way for his clients travelling from Seoul – a day to make the 325km trip to the port city of Pohang, where they’ll stay overnight before catching an early morning ferry to Ulleung-do. The ferry ride takes four hours, but the ever-changing nature of the weather means that schedule changes or cancellations are the norm, especially during winter when the ocean is at its roughest.

“Last time I visited Ulleung-do with clients, I was stuck there for 10 days without a ferry”, says Max casually.

“So you need to be careful if you have a flight booked, or anything like that. It’s really risky.”

I’d like to know what options I have if I’m stuck on Ulleung-do for 10 days, so I ask Max what he and his guests do after a day of skiing.

“We normally hop around the restaurants on a bit of a foodie adventure”, says Max, who reveals that he often goes in search of local beef dishes, made from a Korean breed of cattle (Chikso) that graze on Ulleung-do’s mountain herbs. It gives the beef a darker colour and, according to a quick Google search, a lighter taste and lower fat content.

And at that point I’m sold. With the world in the grips of a pandemic, the idea of being isolated on a secret island where days feature only hiking, skiing and gorging on local delicacies seems instantly appealing.

Summer is the preferred season for many South Korean tourists. Image: @piggybankm

We’ve teamed up with the innovative Swedish team at Flaxta who have recently launched the Deep Space Helmet, an ideal all-mountain helmet with award-winning safety and comfort.